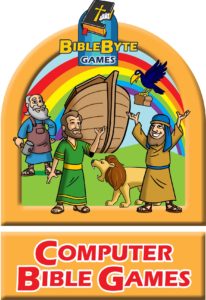 Our classic Computer Bible Games were originally published between 1982 and 2010.  The Bible story games in this section use graphic layouts as game boards.  Some of the games require moving a player figure around  a game layout. This movement can be accomplished in two ways: either by the use of the keyboard letters, pressing “N” to move north, “S” to move south, “E” for east and “W” for west. The second way to move is with a joystick. The games with movement depend on dexterity and coordination. Other games are games of logic, they require you to out think the computer.   These Bible story games can be enjoyed by all ages, beginning with the ability to read. ‘

SHEEP AND THE GOATS – Jesus said that in the last day he would separate the sheep from the goats. You find the sheep by clicking on a grid.” The sheep will always be hiding near a rock. 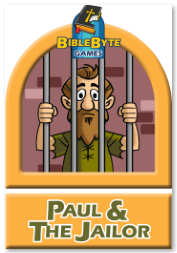 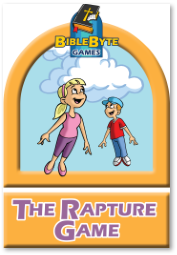 Bible Books Scramble Games – The Bible books scramble games in this section are designed to be lessons for learning about the Bible more than for just being games to play. Of course, what makes them fun is that these Bible lesson games are played on a computer. If these games are being played without supervision and the players are having a bit of difficulty with the answers, it is suggested that a Bible be used to look up the answers. The games in this section require a basic knowledge of the Bible by either the player or the person supervising the
use of the computer.

HOW THESE GAMES PLAY – After loading the game into the computer, to play the game you must type the word “RUN” and again press the “ENTER/RETURN” button. The computer will randomly choose a word which is the name of a book of the Bible with its spelling scrambled and will ask you to type in the correct spelling. After you type in the correct spelling, remember to press the “ENTER” button. The computer will not accept the answer unless it is correct.   In the Old Testament Scramble Games, I and II Samuel are treated as one word, “SAMUEL,” as are also I and II Kings and I and II Chronicles. Song of Solomon is used as one word, “SONGOFSOLOMON.” Likewise, multiple books in the New Testament are treated as one word, “CORINTHIANS,” “THESSALONIANS,” , “TIMOTHY,” “PETER” and “JOHN.”

Bible People, Places and Words Scramble Games – The next group of games contains names of people, places, and words of important meanings.

HOW THE GAMES PLAY – After loading the game into the computer, to play the game you must type the word “RUN” and again press the “ENTER/RETURN” button. The computer will randomly choose a name of a person or place or a word of important meaning and scramble it up. You must unscramble the word and type it correctly. If you use the alternate games with questions, the computer
will randomly choose a question for you to answer in one word. You must type in a one word answer.