The Christian Game Developers Conference Board of Directors announced that they welcomed Phil Conrod as a new Board Member in 2019. Phil Conrod been working in both Game Development and Information Technology for over forty years. In the early 1980s, he was a full-time game developer with over two dozen published titles. After the North America Video Game Crash (1983-1985), he took a full-time technology job in Corporate America and his game publishing company became a part-time business for him. Over the past 34 years, he has served in many different IT leadership roles at several different large corporations including Sundstrand, SAFECO, Kenworth Truck Company, PACCAR and Darigold. He last served as the Senior Vice President & Chief Information Officer for Darigold for over a decade (Got Milk?). He has also published two dozen textbooks which are used in K-12 schools & universities to help teach app & game programming. You can read more about his games and textbook tutorials at https://www.biblebytebooks.com and https://www.kidwaresoftware.com.

Phil is very honored and humbled to serve the Christian Game Developers Community on the CGDC Board of Directors. Please let him know how he can serve the CGDC community in this new Board Member role.

Workshop for Unity 3D to create customizable characters and get them to walk around a 3D scene. Learn the Unity Multipurpose Avatar and how to change skin and hair color, body, proportions and clothes. Take that same 3D character and set it to motion on its own using Navmesh. Preparation required: Bring a laptop, download and install Unity, and get the free Unity Assets “Standard Assets” and “UMA 2” from the Unity Asset Store. Participants should have a cursory understanding of C# scripting. 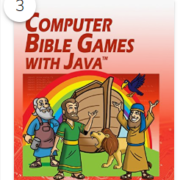 BookAuthority Selects our Computer Bible Games with Java as 1 of the 3 Best New Java Swing Books To Read In 2019!