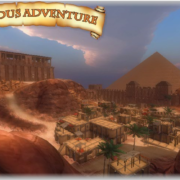 BibleByte Books & Games is working on Extreme! An Apocalyptic Adventure 3D action adventure vehicle based game based on the Book of Revelations.  This Unity 3D Vehicle Controller C# Tutorial is planned for 2019.  Click on the picture above for more details on this new game project.

As announced at the Christian Game Developers Conference​ (CGDC 2014) in Portland Oregon, BibleByte Books & Games is working on a new Computer Based Role Playing Games (RPG)  based on the Missionary Journeys of Paul.  This RPG Game will actually be an PC/MAC Based Adventure Game and will not be a game programming tutorial.  We expect it […]