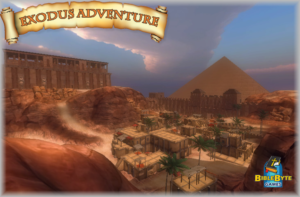 Overview
The Exodus Adventure is a 3D 3rd person puzzle adventure game. The player controls Moses and follows the exciting story of God saving His people from slavery in Egypt. The player will travel the land, talk with its inhabitants, collect items, complete quests, and solve a variety of puzzles.

Cut scenes and cinematics will immerse the player in Ancient Egypt and the story. Changing music tracks to match each area’s feeling will keep help too. Rewarding the player with cut scenes, story progression, and mini-games will hook them to keep playing.

Target Market
The Exodus Adventure is targeted to Christian teenagers and college students. They will appreciate being able to walk around and experience the familiar Exodus story while learning about ancient Hebrew and Egyptian culture.

The genre of the Exodus Adventure is Puzzle Adventure games. Players of this genre expect puzzles of increasing difficulty that are fun and not tedious. Hints must be available for when they feel stuck so they don’t get too frustrated.

– Bible-based: This game is based on the Exodus story in the Bible with the purpose of honoring God, upholding Biblical values, and teaching about the Bible
– Story-driven: The story of the Exodus and telling how God saves his people.
– Fun and Challenging: Challenge the player with puzzles that are fun to solve.
Gameplay

Actors
The game has 2 different kinds of actors for the player to interact with: 1) Character Actors who look and move like people and 2) Object actors that are inanimate. Moses will be both a Character Actor and controlled by the player. The Moses who the player controls will be referred to as the Player Character or PC. Actors will be controlled by a common animator and a script that dictates what the default animations are for the actor.

When the player clicks on the actor or uses an item on the actor then the actor may trigger a cut scene. For purposes of design, cut scenes will also handle dialogue and cinematics. The actor will have a list of cut scenes with conditions that will be done sequentially. See the Cut Scene Section for more information.

Cut Scenes
The Cut Scene engine will handle not only cut scenes but dialogue and cinematics as well. Cinematics and cut-scenes are times in the game when the story will progress without player interaction. They won’t be pre-rendered videos but will have the actors performing animations while dialogue may be displayed onscreen. The difference between cinematics and cut-scenes is the scale of the content. Cinematics will be much longer and have much more involved content than cut-scenes. Each cut-scene will have the option to override the background music. Once the cut-scene is done the background music will play again.

The Cut scene will be organized in a tree with a single head. From each element there can be one, multiple, or no links to additional elements. Cut scenes may be triggered when the player clicks on an actor or enters a trigger area. During cut scenes the player will not be able to move. The Cut scene has elements that include the following:

Two cinematics will bookend this game, one at the beginning and one at the end. The beginning cinematic will catch the player up with Moses’ life in Egypt, murdering an Egyptian, exile from Egypt, Life as a shepherd, and the encounter with God in the burning bush. The ending cinematic shows the excited Israelites leaving the land of Egypt with herds and flocks, collecting treasure from the Egyptians, and other Egyptians coming along with them.

Ending Cinematic:
1. Fade in from black to a close-up of Moses’ face
2. Zoom out to show him standing in front of the Hebrews on the side of the Nile
3. Eagle flies overhead
4. Moses raises his staff and starts walking
5. Everyone else starts walking too and the camera pans up to show the multitude of the Exodus
6. Zoom out and away to show Pharaoh inside his Palace looking out at the Hebrews
7. Show a Hebrew slave walking
8. Show the Hebrew shepherd walking
9. Show the Hebrew wife walking
10. Show the Hebrew elder walking
11. Show Miriam walking
12. Show Aaron walking
13. Show Moses walking
14. Static camera with the city in the distance, Moses leads everyone passed the camera
15. As the Israelites march out it becomes night time and the last of the Israelites march out
16. Fade out to black and roll credits

Inventory
The game has a list of items the player can collect and use while interacting with NPCs. While not in a dialogue with an NPC or in a cut-scene/cinematic the player can view the items in their inventory and see descriptions of the items with hints about what the item is used for. Items will have a 2D image to show in the player inventory and may have a 3D Game Object to represent it in the game world. Icons will be 256×256 2D graphics.

Players will be able to sort their inventory manually. There will also be a sort button that will sort the items alphabetically.

Map
The player can display a map labeled with all the different locations in the game. There is also a mini-map on the screen that is labeled. The purpose for the two different maps is that the player can get a sense of directions of places far away on the big map and a sense of directions of nearby places on the mini-map. Both the World map and the mini-map will be implemented using the NJG MiniMap Asset.
There are two kinds of locations, outdoor and indoor. Outdoor locations use the main outdoor map, while indoor locations use their own separate maps. These areas will be called zones.
When the player enters an outdoor zone, text will show up on the screen so they know it.
Indoor Locations will have transition points that go between that area and the point on the outdoor location.

Menus and Options
The Main Menu will have 4 buttons: New Game, Continue, Options, and Exit. New Game will clear any saved data and start a new game. Continue will Load the saved data and continue from there. In the options menu the player can adjust volume and toggle mute. The player will be able to go back to the Main Menu from in-game.

Quest Journal
A quest is not only a goal for the player to achieve but a hint for what to do next so the player never gets stuck. Quests are kept in the player’s journal and are separated into books and chapters. The reward for completing quests includes: items, unlocking the next quest in the chapter, and unlocking one or more chapters. The reward for completing a chapter includes: items and unlocking one or more chapters.

In order for the player to see the chapter a quest in it must be active in the Quest Journal. There may be multiple quests from different chapters active at the same time. Each chapter may only have one quest active at a time. Completed quests in the chapter will be displayed in the journal as checked off the list. Uncompleted quests that are not active in that chapter will be greyed out. Some quests will have pre-requisites, meaning that in order to make them ready for completion the player must complete another quest. In this case the pre-requisite will be bolded and colored red so the player knows they need to meet the pre-requisite. When the pre-requisite has been met then the pre-requisite text will not be displayed. Visible chapters may be expanded or collapsed by the player. Chapters with all quests completed will show as 100% completed.
The quest journal will display the following information about each quest: quest name, description, associated actors, and associated location.

Graphic Assets
The 3D art assets will use the Egypt Characters and Ancient Egypt pack. The pre-existing outdoor city scene will be used as-is. Various objects and NPCs will be placed there to populate it. The indoor locations will be built using the building block pieces of the indoor and temple prefabs.

There will also be a skybox. Day/night will be adjusted using the Exposure variable in the skybox material for standard cycles.

The PC will use the 3rd Person Controller to move around and the included camera controller to control the camera. The basic controller supports walking, running, jumping, flying, sprinting, aiming, and strafing. The flying and sprinting will be disabled. The Player Controller will be modified to support footstep sounds as well as grab low, grab medium, and grab high from the Raw Mocap Animations. The footstep sounds will change based on what the player is walking on (stone, dirt, grass). The camera controller will be modified to support zooming in and out using the mouse wheel.

NPCs will also have animations depending on each NPC and what actions they are taking. Some NPCs may have complex or chained animations, each played for a specific length of time.

Music and Sound FX Assets
Music will change based on the location or in cut-scenes. The pyramid and palace will have their own music. Also, the overland locations are divided into the city, wilderness, and slave camp which will change music when the player enters those locations.